While the CAMS Manual of Motor Sport details the general compliance requirements for Group S, much regarding its history and development has been lost.

As a result, many misunderstandings about Group S have developed which confuse not only new entrants but also current competitors.

The purpose of this short history is to better inform the motor sport community about Group S, its history and development, and its governance and culture.

The Genesis of Production Sports Car Racing in Australia 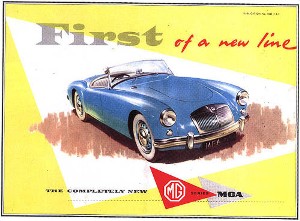 Production sports car racing in Australia developed in the post World War 11 period and largely in parallel with the release of the “classic” sports cars of the early-fifties.

Production sports car racing participants were largely owner-drivers who drove their road registered sports car to the track, removed items such as windscreens, bumper bars, and anything that could be easily unbolted, and replaced the road wheels with a set of wheels fitted with treaded racing tyres. At meet’s end, road wheels were refitted, windscreens and bumpers replaced and the cars driven home.

The culture of the racing was predominantly amateur with the cars being typically open sports cars of British origin such as MG T series, MGA, Austin Healey 100/4, TR2/3, (Bugeye) Sprite and Morgan.

The need to keep the cars in compliance with road registration requirements and to minimise cost ensured that modifications were limited, and largely confined to engine and suspension tuning.

Many regard this as a golden era in production sports car racing, but it began to fade by the mid-sixties when high performance variants of sedans such as the Mini Cooper made serious inroads into the sales of open sports cars. Additionally when some owners commenced modifying their production sports cars into more specialist sports racers with flared bodywork, wide wheels and other racing modifications aimed at increased performance, many of the original participants were driven away by the additional cost and quest for racing specialisation.

In 1981, the Historic Committee established Groups J, K and L as a mechanism to assist the preservation of historic racing cars. Initially all historic racing cars with a proven “racing history provenance” were issued with a logbook detailing their historic group. But as the rules evolved these cars with a proven “racing history provenance” would later be issued with “Certificates of Description” which listed in detail the specification to which the car was henceforward to be preserved. 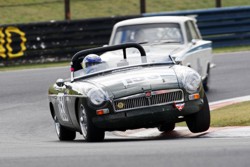 As Group La cars and the Groups Sa, Sb and Sc successors did not have a racing history they could not be issued Certificates of Description. They were issued with historic logbooks with their permitted levels of modification being eventually regulated by individual Specification Sheets which detailed the specification of each model.

Group La cars were also restricted to a level of modification that was largely consistent with the need to maintain a road registration and broadly in line with the modifications that were permissible in the late fifties period of Australian production sports car racing. The rule preamble described the intent of the cars’ modifications to be “in a form similar to period club racing”.

Two such detail requirements were a maximum wheel rim width of five inches and the use of 70 series profile tyres. 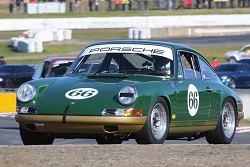 At the same time the Commission renamed Group La as Group Sa, with the newly established Group Sb being for production sports cars manufactured from 1961 to 31 December 1969. NSW competitor Greg King was one of the first Sb competitors in his MGB.

In 1997, the Historic Commission decided to acknowledge a further technological period in sports car development - the seventies - when it established Group Sc for production sports cars manufactured from 1970 to 31 December 1977.

Throughout this evolution, the Historic Commission has maintained that the rules for Group S remain largely within the spirit of those rules that were in use in Australian production sports car racing in the period of the mid-fifties to mid-sixties, with the modification baseline being what was sold from the showroom floor by the relevant marque dealership.

The Historic Commission was also keen to preserve Australian limited production sports cars and included some of these cars in the Group S classification.

Eligible marques for Group S have been decided by the Historic Commission on the basis of production runs and production specifications. FIA homologation is not a relevant factor and plays no part in the rules for Group S – a common misunderstanding. CAMS is the delegated FIA authority and CAMS decides the rules for Australian motor racing (the same as NZ and US authorities make rules for motor racing in NZ and the US).

There is also no nexus between Group S and Group N – another common misunderstanding. Each category is unique and has evolved in a different way to meet the needs of differing motor sport communities.

A further misunderstanding is that the compliance requirements of both Group S and Group N are similar. They are not because the starting points, concepts and culture of each historic motor sport group are different. Group N racing is meant to reflect the popular Appendix J racing of the period and its rules are based on the period rules. There were no equivalent Australia wide sports car rules of the period.

There is no doubt that the current regulatory system has seen Group S evolve into one of the strongest classes in historic motor sport.

The class attracts a substantial band of devotees who have a passion for historic sports cars, an enthusiasm for affordable and amateur motor sport, and who wish to enjoy the satisfaction of spirited competition on a race track.

The stability inherent in the governing rules for Group S is also a factor in the success of the class as new entrants can enter the class without the fear of having a rule changes make their investment in historic production sports car racing obsolete.